What IS That?! Dog Vomit Fungus: The Weird Slime Mold in Your Garden

What's that weird, foamy blob that just appeared on your mulch or lawn overnight? No, it's not from a cat puking in your yard, and despite its common name of dog vomit fungus, it's neither dog vomit nor a fungus. The unusual mass is known as a slime mold, and while it's unsightly, it's completely harmless to humans, animals, and plants. It's also an excellent decomposer in your garden! Here's what you need to know about slime mold (Fuligo septicai) and how to get rid of it (or why you'd want to keep it around). 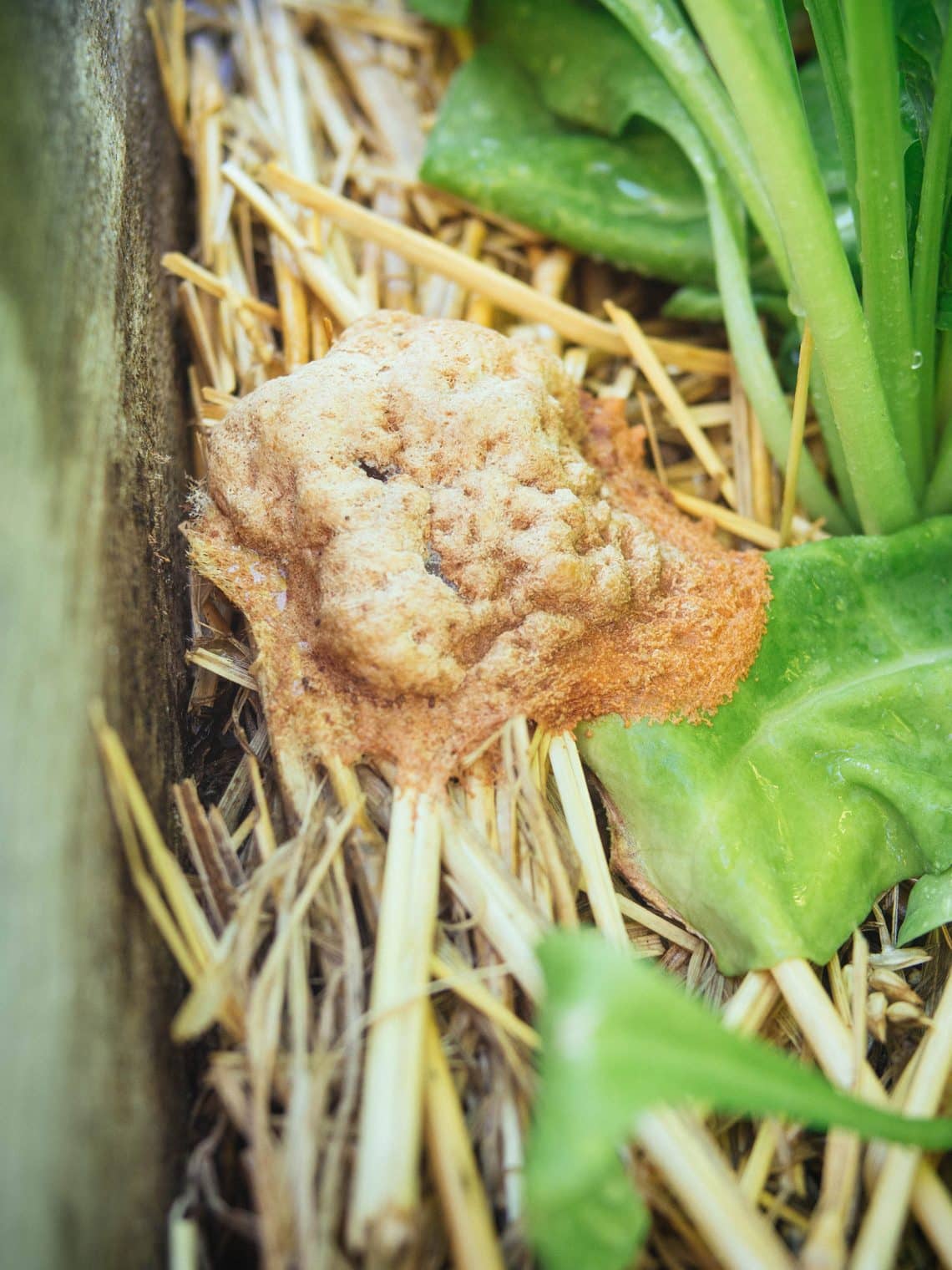 Anyone who tends a garden has likely seen all sorts of mushrooms pop up over time on their mulch, lawns, or garden beds, particularly after a good rain.

And while they can sometimes be concerning if you have curious pets or children, mushrooms are actually a good sign of healthy soil because they feed on decaying plant matter and turn that into nutrient-rich humus. So, mushrooms mean all kinds of good things happening in your soil!

Here in Central Oregon, we had an unusually wet spring followed by a blazing hot summer that called for more frequent watering. I ended up with a smorgasbord of mushrooms growing alongside my plants: bird’s nest fungi, cup fungi, Conocybes, and many more that I’ve never identified.

But what stopped me in my tracks one day was something quite out of the ordinary: a lumpy, yellowish-white blob on my straw mulch that looked like a cup of vomit had spilled in my garden bed. Pleasant, right?

This was unlike any mushroom I’d ever seen. Did a cat come in my yard and puke? Was this stuff dangerous? Harmful to touch? Or breathe?

Related: Keep Cats Out of Your Garden With These 9 Natural Deterrents

Turns out, the aptly named dog vomit fungus is fairly common in gardens and despite the crude name, it’s neither dog vomit, nor a fungus.

What is dog vomit fungus?

This unusual “fungus” is just one out of over 900 different types of slime mold. Slime mold is the casual name given for a soil-dwelling, single-celled primitive organism that combines with other cells to form a plasmodium—essentially, a blob (kind of like an amoeba).

The plasmodium, which varies greatly in size depending on the species, moves around in a creeping or crawling manner as the cells multiply, consuming the bacteria in organic matter as it goes.

Plasmodial slime molds belong in the phylum Myxomycota in the kingdom Protista, and the most common slime mold that appears in mulches and on lawns is from the genus Fuligo (which, confusingly enough, is not actually mold even though it’s called slime mold).

That weird, foamy, bile-like blob is a species called Fuligo septicai—though I have to admit that its common names of “dog vomit fungus” or “scrambled egg slime” have a better ring to them, right? Ha!

Slime mold starts out as a transparent film, almost like egg white. Most people don’t notice it in their yards until the plasmodium changes into a spore-bearing fruiting body (similar to a mushroom) called an aethalium—a thickened, cushion-like, irregularly-shaped structure that’s whitish, tan, bright yellow, or orange in color. This change usually happens in the evening, so by the next day it looks like the “vomit” just magically appeared.

Slime mold is completely harmless to humans, animals, and plants. Perhaps the only (rare) risk to neighboring plants (particularly small seedlings) is being smothered by the blob as it grows.

But slime mold isn’t after your plants, even if it’s growing around the base of the stems—it feeds on decaying organic matter, which is why it’s often seen in mulched areas where the mulch is starting to break down.

Dog vomit fungus can appear anytime from late spring through fall in warmer weather and moist conditions, whether from rain, humidity, or excessive watering.

It thrives in shady places, so in my case—where a hot, dry summer prompted me to water more frequently and cover my beds with shade cloth—the piles of consistently moist straw mulch made for a perfect breeding ground for plasmodia to grow and spread.

Dog vomit fungi appear on every continent; their origins are in the trees that make up the mulch they usually grow on. They can be found in bark mulch, rotting logs, tree stumps, untreated lumber, and leaf litter.

Even though it sounds kind of cool and sci-fi to learn that the blob can move on its own, you’re not likely to witness actual movement unless you have lots of sitting time to observe this.

Like true fungi, slime mold is spread by spores through the air. After it goes through the slimy stage, it begins to crust over and turn brown. If disturbed, the spores will puff up (like a brownish-black cloud of dust) and distribute to nearby areas.

Touching, moving, or spraying water on the crusted blob at this point, in its mature stage, will only increase the amount of spores that spread in your garden (which isn’t necessarily a “bad” thing since it’s harmless—but it’ll result in these unsightly organisms showing up in greater numbers next season).

How to get rid of dog vomit fungus in your yard

The most effective way to get rid of dog vomit fungus in your yard is to remove it while it still looks like slime. To keep things as neat and clean as possible, I like to slip my hand into a plastic bag, carefully pick up the slime (including any mulch it’s attached to), turn the bag inside out to contain it, then toss it in the trash.

Using any tool to pick up the dog vomit fungus will stick the spores to your tool, meaning you’ll have to spend time cleaning your tool to make sure it doesn’t spread to other areas of the garden.

Don’t try to compost or burn the dog vomit fungus, and definitely don’t let it turn to the powdery stage before you get rid of it. If it does turn to powder, don’t hose it down to wash it away! (Oops, been there, done that.)

Remove the dog vomit fungus as soon as you see it, and you won’t have to deal with a slime mold problem later on.

But what happens if you simply let it be? Since dog vomit fungus is innocuous, do you really need to control it?

No, not really. If you leave the dog vomit fungus alone and dial back your watering, it’ll just harden, fade in color, dry up and decompose, becoming less noticeable in your yard. It does leave behind millions of spores that’ll get carried away by wind to grow again on another day, continuing the cycle of healthy (and free) decomposers in your garden.

Remember that dog vomit fungus only appears when conditions are just right for it to survive: warm, wet, and shady. If you practice better watering habits and expose your garden to more sunlight (by pruning trees that may be casting shade over your plants, for example), you’ll make things less desirable to slime mold.

I'm a plant lover, passionate road-tripper, and cookbook author whose expert advice and bestselling books have been featured in TIME, Outside, HGTV, and Food & Wine. The No-Waste Vegetable Cookbook is my latest book. Garden Betty is where I write about modern homesteading, farm-to-table cooking, and outdoor adventuring—all that encompass a life well-lived outdoors. After all, the secret to a good life is... Read more »

This site uses Akismet to reduce spam. Learn how your comment data is processed.

Cover Cropping the Easy Way: How to Grow Field Peas for Fertilizer

I live and play in beautiful Bend, Oregon, where I write about urban homesteading, farm-to-table cooking, and outdoor adventuring—all that encompass a life well-lived outdoors. I believe the secret to a good life is... Read more

Garden Betty independently selects products to feature on this site. I may receive a commission when you buy something through one of my links. As an Amazon Associate, I earn from qualifying purchases. More details