My fiancé Will and I will be getting married this year in a seaside village in Northern Baja called La Misión. Every New Year’s Eve, we rally a group of friends for a little surf adventure that’s just a short drive south of the border but feels like we’re worlds away.

Baja holds a very special place in our hearts — not only do we spend every New Year surfing there, we also celebrate our anniversary every New Year. So when we started dreaming up ideas for a destination wedding, Baja was high on our short list. We wanted to share this beautiful place with the friends and family who haven’t yet made the road trips with us. A wedding was the perfect excuse to get people together for one big, long, party-filled weekend.

With a date set, we planned to meander along the coast and start our venue search. Our visit coincided with our friends’ trip on the same weekend, so we decided to caravan with them down the peninsula.

Moko and Austin — two people who crave adventure and the pure life as much as we do — were towing their fresh-off-Craigslist travel trailer to a surf community south of Ensenada. Will and I tagged along because not only do we lust after our own trailer one day, but our friends were permanently parking theirs on a point break so remote, it was considered the “real” Baja. They would be moving into their sweet new vacation home, and there would be waves right in front. We were sold.

Every time we drive down Baja, I’m amazed at the amount of pristine, uninhabited coastline I see. There are a few highrises and gated gringo communities here and there; but if this gem had been a part of California, an overpriced colony of Malibu-esque manses would be fronting those beaches.

Here in third-world Baja, beat-up trailers and greasy taco stands get equal share of the million-dollar views. I love to drive along the coast and imagine myself living in one of those trailers in my itinerant hippie fantasy.

We drove past the northern cities and turned inland into the local wine region, trading endless ocean views for rustic rolling valleys. (Baja wine for the wedding, yes!)

Those two-lane paved roads turned into one-lane dirt roads, getting narrower and narrower the further we drove, until we finally reached the coastline again with offshore winds rolling off a rocky point. Four hours after we crossed the San Diego border, we arrived at this secluded heaven.

There’s not much happening here, and that’s exactly how the handful of ex-pats and locals like it. It’s miles from the main highway. Its waves are forgiving and uncrowded. A busy day at the break means half a dozen people in the lineup. Trailer encampments dot the rugged coastline. There’s a hostel above the beach with campsites on the cliff for your tent or your Westy. It’s a perfect little slice of the slow life.

In front of the hostel, a set of whale bones was splayed on the sand in all its grandeur. It had washed up ashore a couple miles away, and the guys from the hostel and the neighboring ranch hauled everything back with their trucks and reassembled the skeleton piece by piece.

The head alone was over 20 feet long!

Next door to the hostel is a quirky compound dubbed the Boat Ranch.

In the early 80s, professional psychologist and former professional surfer Kent Layton defied his naysayers and purchased 14 unwanted boats from San Diego Harbor, all with blown motors and rotten hulls. Some owners even offered him money to simply haul them away.

Paying around $50 a pop for Federales escort on the highway, he towed the cabin cruisers and yachts all the way through Tijuana and Ensenada to this nearly deserted headland, where a surf break had just been discovered 12 years earlier.

He laid out the Boat Ranch about 30 yards from the cliff’s edge, positioning each boat with its bow angled 28° into the prevailing wind.

These defunct boats offered shelter and escape at the same time. A few transient surfers rent them out and fix them up throughout the year, but often the Ranch sits empty. Each boat bears the artistic mark of its former tenant, from rock gardens to glass bottle sculptures. 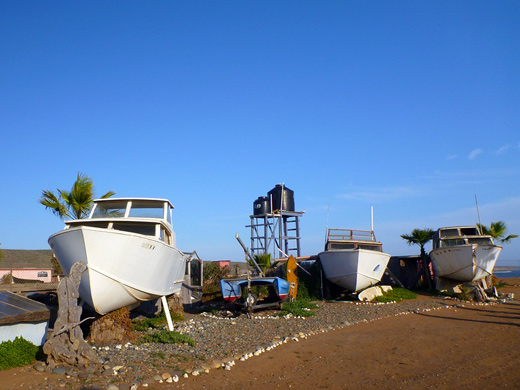 In the back of the Ranch sit three empty lots to build or park whatever you desire, and Moko and Austin just laid claim to one of them for their 30-foot trailer.

Just out their “backyard” is an unobstructed view of another surf break for us to explore.

Or should I say, a surf break for Moko and I to explore while her husband works on their trailer!

While they were getting acquainted with their new home, Will and I checked in to the guest trailer at the Ranch.

Or even fixing up one of the old boats to live in. This could very well be my itinerant hippie fantasy come true.

And the waves? I could’ve surfed that fun little longboardy break all day.

A typical dinner would be that morning’s catch from the local fishermen, whether it be lobster or yellowtail. I never thought some of the freshest sushi I’d ever taste would be in Mexico.

At night we’d sit around this fire pit, ringed with row boats turned on their sides. It made me want to learn how to strum guitar and beat a bongo.

Instead of fire wood, we filled the pit with dried yuccas that we scavenged from the hillsides along the road.

We’ve got some serious yucca going on here.

And when you throw one into the fire, it looks like this.

It’s hard to tell without a point of reference, but the flames topped 5 feet and I thought my friends were going to break out in chant and sacrifice me to the surf god.

I’d also just gotten a new cast-iron Dutch oven that I couldn’t wait to fire up. There was no better way to break it in than a Baja bonfire with great friends and great food. Bubbling inside that oven was a lazy peach cobbler, Boy Scout style!

It went so fast that I could barely get a picture before the last slices were scooped up.

As if the sacrificial fire wasn’t exciting enough, we also lit a few fireworks and ran for cover. Bottle rockets blasted into the air like it was Fourth of July!

It was hard to leave the Ranch after our weekend of doing nothing at all and everything we wanted, but Will and I were on a mission… to La Misión. This tiny town, if you can even call it that, is one of many pocket communities that line the Gold Coast of Baja. We had only been there once on a whim to surf the beach break at K58, but I remembered the dramatic cliffs and expansive shoreline and utter seclusion of this stretch of coastline.

Through weeks of searching online, I had discovered a little-known boutique hotel perched high on the cliffs with what seemed like a thousand steps down to the beach. It had only nine rooms, an old-world Spanish flavor, and perfectly enough, its name loosely translates to “little heaven.”

You know everything is right in the world when this is the view from your bed in the “standard” room.

I don’t want to give it all away yet since our plans are still in progress, but I get all giddy when I see this beautiful backdrop for our barefoot wedding.

If I’m feeling extra wild on my wedding day, I might even make my entrance on an ultralight… ?!

And of course, there’s a surf break right in front with your pick of peaks.

We wrapped up our long weekend with lunch at the best taco stand in all of Rosarito — El Leñador Grill. All of their tacos are outstanding, but I especially love the marinated and grilled peppers and onions. I could just eat a whole heaping plate of those and be happy.

We continued up the coast with the windows rolled down and the salt breezes whipping our hair. While I took a siesta on the beach, Will paddled out for a few peelers at K38. A little grub, a little surf, and not once did we check the time while we were down south. This is why I love Baja.

I'm a plant lover, passionate road-tripper, and cookbook author whose expert advice and bestselling books have been featured in TIME, Outside, HGTV, and Food & Wine. The No-Waste Vegetable Cookbook is my latest book. Garden Betty is where I write about modern homesteading, farm-to-table cooking, and outdoor adventuring—all that encompass a life well-lived outdoors. After all, the secret to a good life is... Read more »

This site uses Akismet to reduce spam. Learn how your comment data is processed.

First Tomato of the Season

I live and play in beautiful Bend, Oregon, where I write about urban homesteading, farm-to-table cooking, and outdoor adventuring—all that encompass a life well-lived outdoors. I believe the secret to a good life is... Read more

Garden Betty independently selects products to feature on this site. I may receive a commission when you buy something through one of my links. As an Amazon Associate, I earn from qualifying purchases. More details